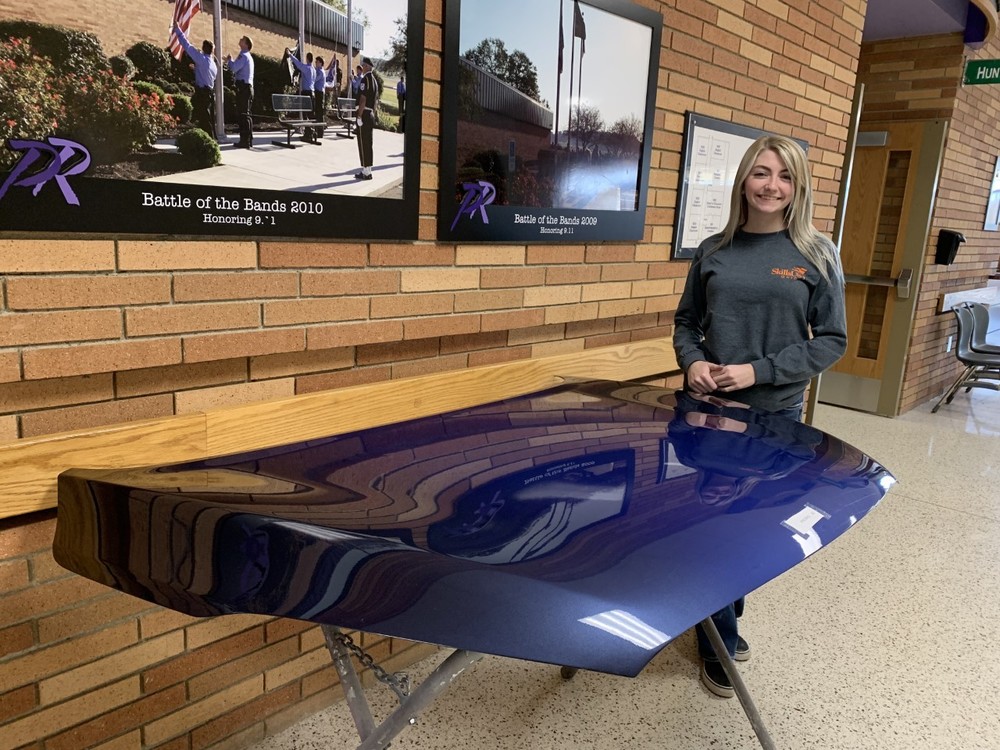 As a cheerleader at Adena High School, Anna Betts is a flier. “We do stunts and I get to go up in the air with the girls. You just can't be nervous or look down.”

That attitude has certainly come into play at Pickaway-Ross, where Anna has soared in her Auto Collision Repair program, academics and SkillsUSA, her career and technical student organization (CTSO).

Anna said she knew she was interested in one of the automotive programs but it was instructor Brian Morrison’s presentation during sophomore tours that solidified which program to take.

“I've grown up around cars and stuff. But (in Collision Repair) I like the customizable aspects of painting cars and I felt like it was a good choice to go in there because I can paint and do mechanics and straighten frames and stuff.”

In addition to being impressed by “Mr. Morrison and how he interacts with the students” during tours, she has come to appreciate all of the teachers at the career center.

“They will sit down with you and actually walk you through it so they make sure that you understand. So the whole time that I've been here, I've had a 4.0 (grade point average) because of the academic teachers.”

She plans to go to college to study business or public affairs and is in the process of going on job placement as an assistant secretary at a body shop.

Anna is secretary for SkillsUSA and thinks working at a body shop will be a good fit with what she’s learned in her lab and in her CTSO.

Anna competed at last year’s SkillsUSA regional competition in Collision Repair and was a state and national delegate, said Jennifer Widdig, one of the group’s advisors. In addition to being senior secretary, she is a regional delegate and will be one of Pickaway-Ross’ state delegates in May.

“I've learned a lot of leadership skills and that's what really got me interested in (studying) business,” she said.

She’s also happy with the knowledge she’s gained from her program and expects to use it after high school.

“I can work on my family’s cars (and) figure out what's wrong with my own car instead of having to take it to the shop. That's a big perk of doing something like this.”