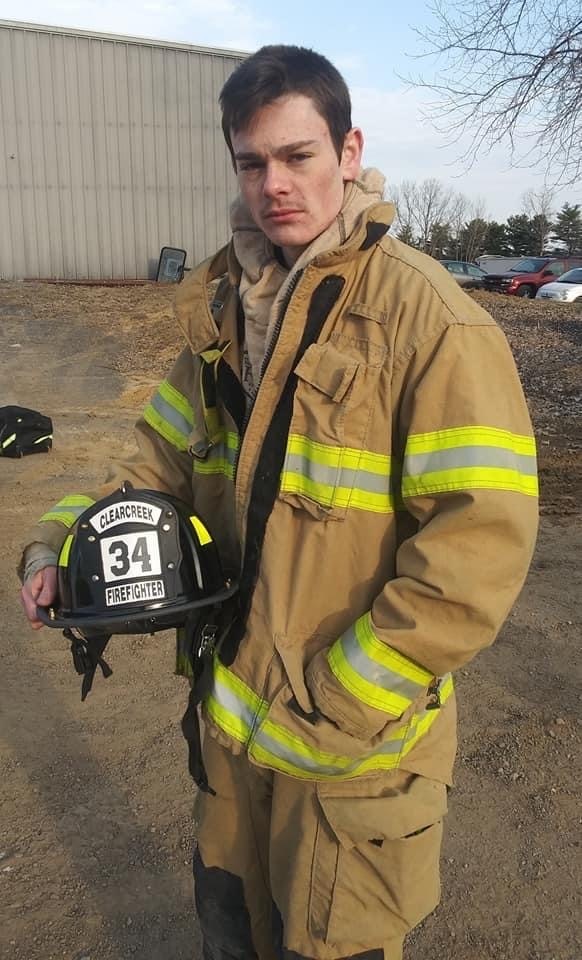 There will be at least one new undertaking by Pickaway-Ross’ SkillsUSA chapter when the career center fields a contestant in the Firefighting competition at the state contest in May.

“My goal as a SkillsUSA advisor is to give students opportunities and I felt like he was missing out even though it was for a good cause,” SkillsUSA co-advisor Jennifer Widdig said. “Because he spends half his day in LPS and half his hours in the Adult Firefighter course through our school, I thought that maybe that would qualify him to be allowed to compete in the firefighting competition.”

Waylon was disappointed that he couldn’t compete for LPS. He had been active in SkillsUSA, serving as an officer his junior year.

The Firefighting contest is fairly new as a high school competition, Jennifer said.

“It is a great opportunity for Waylon, Rex and the Adult Ed instructors (Jan Siders and Kevin Andrus) to collaborate.”

The Firefighting competition will test Waylon on his general knowledge of firefighting and a skills assessment.

A few weeks after starting the Adult Education program, he joined the Clearcreek Township Fire Department as a volunteer firefighter.

He is confident going into the competition that he’ll use what he’s learned in class.

“Everything from ladders, how to extend a ladder properly, how to climb up it properly; ropes and knots, how to tie those knots properly. It all kind of seems simple. But there are a lot of things that for safety reasons … make sure we do it right because something can go horribly wrong if we don't, so it does take skill.”

Jennifer said Waylon competing is an opportunity for the chapter.

“He is possibly opening a door for us to annually collaborate with our Adult Ed instructors and compete in firefighting,”

Waylon’s initial plan when enrolling in LPS was to enlist in the military.

“After coming here, I (found I) enjoyed law enforcement. I started doing ride-alongs with Pickaway County and Circleville Police Department. And I just fell in love with that. And now it's just something I really want to do,” Waylon said.

Waylon is in the process of being hired at the Pickaway Correctional Institution after he finishes high school. But he also is enjoying his firefighter class so his post-secondary plans include more education. After completing Firefighter 1 in May, he would like to take Adult Education’s EMT-Basic course.

Waylon credits instructor Rex Cockrell — an alumni of the high school’s Carpentry program and multiple Adult Education Public Safety programs — with helping him on his path. He said entering LPS, students may not know what they’re getting into.

“So he gave us that training and a little bit of that foot in the door of what you're going to really see. Everybody looks at the public safety world, a lot of lights and sirens, you know, fast-paced movement, and that's all fun.

“But you know, there's so much more to it and he goes above and beyond … to help all of us here and get us somewhere that we want to be.”