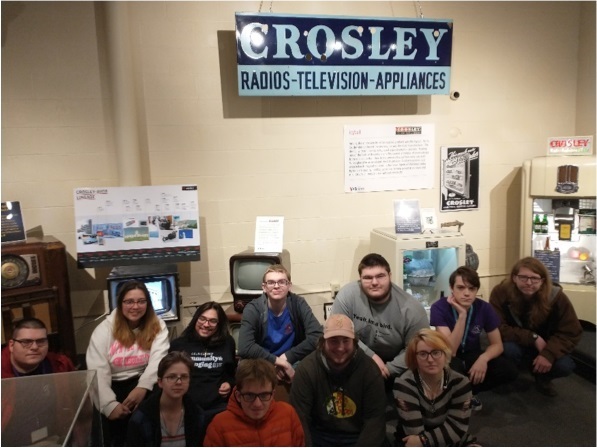 The museum has exhibits related to the history of the VOA, WLW radio and TV, and the Crosley Corp. Crosley was a significant player in the early part of radio and television and developed many technologies used in industry and the home.

The building that houses the VOA museum used to be a relay station where VOA content was sent to be beamed to various parts of the world. In the 1990s the station was deactivated and the antenna arrays demolished and removed. The building remained with its transmitters and other equipment still in place. This equipment now serves as part of the historical exhibits in the museum. Other exhibits outline the history of VOA and its current operation, which is believed to reach more than 400 million people via radio, online streaming and other technologies

Students were first given an orientation of the mission of the VOA and then visited an amateur radio station housed in the VOA building. A licensed amateur radio operator was present who discussed aspects of amateur radio technology and operation.

The students then moved on to the historical exhibits to view how the station’s control equipment was used to relay content and how the antenna arrays could be configured to beam transmissions to specific targeted areas in other parts of the world.

The portion of the museum dedicated to the Crosley Corp. interested the students who learned how Crosley developed powerful transmitters, home appliances and other forms of communication equipment. The exhibit on WLW radio and TV was also viewed by the students, who were amazed at the number of celebrities who got their start at that station.

The students asked many questions and had a wonderful day at the museum. The group is looking for other museums related to radio and TV to visit next year.