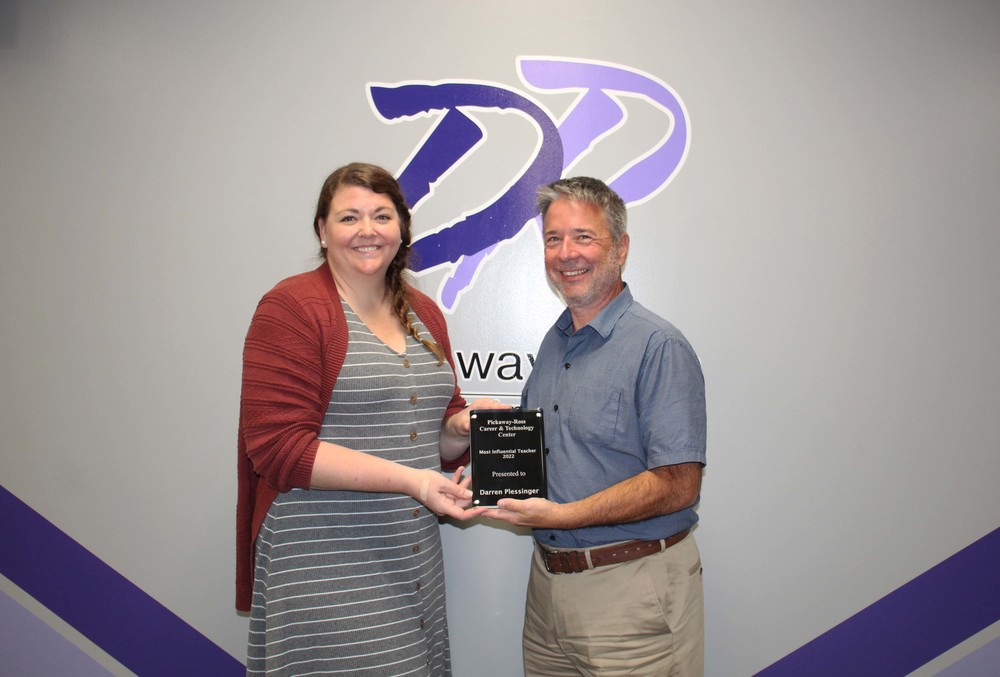 When Darren Plessinger retires in May, he will take with him 17 years of memories at Pickaway-Ross, friendships and the knowledge that students appreciated his method of teaching.

Darren was named the career center’s 2022 Most Influential Staff Member and presented with the award last week during a staff meeting.

Seniors in the preceding year nominate staff members by submitting an essay that  details how a staff member impacted them during their time at Pickaway-Ross. Board members review nominations and select a recipient.

In Darren’s nomination, the student cited Darren for encouraging questions, valuing students and taking time to ensure students understood what was being taught.

Darren said he was surprised when the 2021 recipient, Katie Hewitt, announced his name and presented him with the plaque.

“I didn't expect it and it felt really good because I have always tried to be vigilant to do a good job. I can be pretty tough on the kids.

“I mean, I'm not mean. I think I'm very flexible but at the same time I'm really demanding and very traditional in a lot of ways and very old school in a lot of ways. And I think a lot of my students don't appreciate me while they have me. Or they don't (think they like me) at the beginning of the semester but a lot of them say they do at the end of the semester and I think that requires a level of maturity.”

Darren teaches Government, History and Social Studies. But after high school, he didn’t plan to be a teacher. He started his post-secondary education at Sinclair Community College with the intent of becoming an auto mechanic. But he realized that while he liked fixing cars as a hobby, he didn’t want to make a living from it.

He decided to transfer to Miami University and discovered a short time later that he might like to be a history teacher.

A drummer in a local band, Darren has said his dream job growing up was to be a Beatle but there wasn’t an opening. But he believes teaching has a performance aspect, which he enjoys.

While he acknowledges that his motives to teach may not have been pure at first, he developed a genuine passion once he started teaching. He credits professors for helping him learn to be a skilled writer and teacher, and colleagues and supervisors who helped him grow as a teacher.

“I went in his classes with the intention of staying a few minutes and would end up staying the entire class period. Darren is truly passionate about teaching and reflects genuine respect and caring for his students’ learning and well-being. Students in his classes are always engaged and given a voice,” she said.

Before coming to Pickaway-Ross in 2006, Darren worked for 14 years at Mount Logan Middle School in Chillicothe and then taught middle and high school students at Southeastern from 2003-2006.

With almost 34 years of teaching, Darren said he has loved all of his experiences.

“I've loved being here. (When I interviewed at Pickaway-Ross), they asked me why I wanted to work in the tech school because I had only been in a traditional high school. And I related to them that I actually went to Sinclair to be an auto mechanic and that many of the labs here are either hobbies of mine or, you know, jobs.

“I did Early Childhood Education for two years at Miami, studying to be a teacher. I have been in Commercial Foods. I was a machinist for General Motors. I was in Automotive Technology and I still love wrenching on cars. I do carpentry and rehab my own homes. So I have a great appreciation for many of our labs.”

He doesn’t know what retirement will hold for him but he is enjoying his last year on campus.

“It's almost like the ghost of my career past because Jeff Metzler and I worked together 30-some years ago at Mount Logan. Pat Laughlin worked with me at Southeastern. So there are people in the building that I've been with in all three major phases of my career.”

Dakota Tackett, who joined Pickaway-Ross this year after a long-term substitute post last year, credits Darren with instilling in him the goal to be a social studies teacher.

Darren said he hopes his impact on his students will be a positive one, even if it’s not right away.

“I like to believe that my students, as they mature, will appreciate what I tried to do with them. I've always tried to inspire and interest in them in the material so that they can go on and learn on their own.”