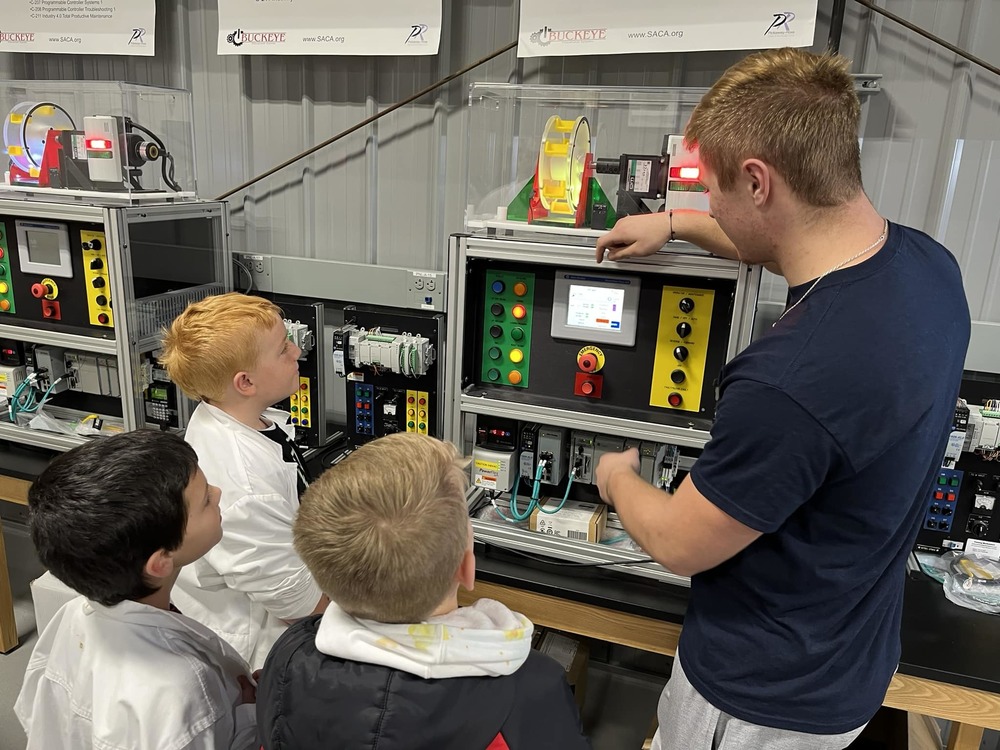 Jenni Domo teaches first- through fifth graders at Unioto Elementary but is opening their eyes to a future that could include Pickaway-Ross.

Josh created a project in which the students heard a voicemail that he received from Santa. Some of the elves had the flu and Santa needed help building toys.

“Then I read them a story that I wrote about how Santa makes all of his toys,” Josh said. “I split them into two groups and created an assembly line where they built solar powered cars, to simulate a manufacturing facility,” or Santa’s workshop.

Jenni said the field trip allows her students to “see it so they can be it.”

“We can have the littles work with the bigs and make a partnership this way.”

Josh also set up stations and his seniors taught Jenni’s students in smaller groups about each piece of equipment.

Ryleigh Bode (Unioto) taught them about the FANUC Robot and how their human bodies are like the robot. Then they all got a chance to move the robot. They learned about electronics with Harley Congrove and Collin Wright (both from Huntington), who explained about circuits and let the kids build one.

At the Vex robots station, Trevor Banks and Aaron Valentine (both from Chillicothe) had the third graders compete against each other with the competitive robots. After that, students went to the CNC milling machine where Jacob Byrd (Chillicothe) and Isaac Thornton (Zane Trace) explained how CNC milling worked and they got to see the machine run.

The next station was the Yaskawa Motoman robot, where Meryl Haller (Chillicothe) explained the logic behind programming and the decisions a robot makes. Students had a chance to play tic-tac-toe against the robot. Last was the PLC (programmable logic controller) station where Silas Henson (Chillicothe) and Daniel Barnhart (Zane Trace) explained how a Ferris wheel works and students got to operate one.

“My students benefited by being able to display their own levels of knowledge and also being tasked with setting up their own stations,” Josh said.

Jenni and Josh met when two of Josh’s children were in SCOPES. Once Josh explained what he did at Pickaway-Ross, Jenni said a mentorship was created.

“When you find somebody who’s in the field, finding that mentorship is essential. Josh is such a gem to me to run things (by). This type of professional colleague is an absolute must because there's not that many of us,” Jenni said.

“I love collaborating with others. Jenni is a fantastic teacher and gives elementary kids a way to explore STEM in a way that gets them excited about engineering. I feel that putting the effort into the younger kids is what helps children say, ‘I want to be an engineer when I grow up’ or whatever other STEM field they may choose.

“I definitely believe working with Jenni to make this happen makes me a better teacher,” Josh said. “Developing something for elementary kids is much different than for my high schoolers. It helps me grow and become a better educator.”